OM5, previously known as wide band multimode fiber or WB MMF, has been quite the hot-button topic as the standards have been widely debated and are now finally concrete.

So what is OM5 exactly? Most simply, it’s a version of the OM4 fiber with additional bandwidth characterization at 953 nm.

But of course, that’s not all.

What is different about OM5?

The OM5 optical and mechanical attributes are compliant with OM4 50/125 μm specifications and include the additional specifications of effective modal bandwidth and attenuation at 953 nm. WB MMF is intended for operation using vertical-cavity surface-emitting laser (VCSEL) transceivers across the 846 to 953 nm wavelength range.

SWDM is a proprietary wavelength division multiplexing (WDM) technology that uses four wavelengths across the 850 to 940 nm range. SWDM transceivers were designed to use 2-fiber connectivity into the transceiver with OM3/OM4. SWDM VCSEL transceivers are expected to be commercialized throughout 2017. See figure 1. 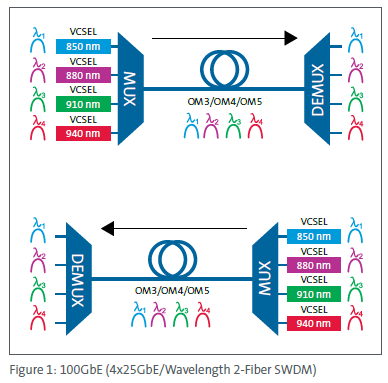 Can SWDM be used over OM5?

What are the expected SWDM data rates and distances?

The 40/100GbE expected maximum operational distances are given in the table below.

What are the specified OM5 effective modal bandwidth (EMB) values?

How do OM3/OM4 EMB values compare to OM5? 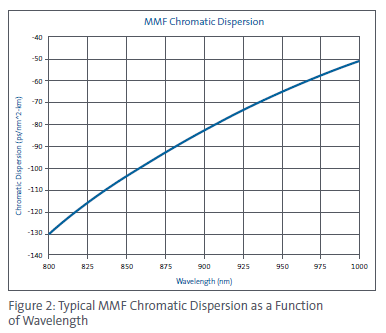 Is OM5 specified in optical transmission standards such as Ethernet and Fibre Channel?

What cable jacket color will be used for OM5?

TIA has specified lime green as the official cable jacket color for OM5.

Does this new technology require a new polarity method for the duplex fiber connectivity?

No. Traditional Corning universal polarity connectivity solutions can be used. End users are expected to deploy solutions with Base-8 or Base-12 MTPR backbone cables and MTP-to-LC modules or harnesses to breakout into 2-fiber LC interconnects.

Will field channel loss measurements be required at both 850 and 953 nm?

Can BiDi transceivers be used with OM5?