While the smart people who install, test and certify network cabling plants know the importance of meeting standards performance parameters and ensuring application support, even the best of us can make mistakes that adversely impact the bottom line and customer satisfaction. 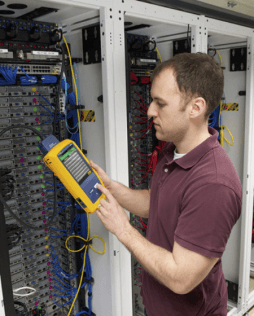 In a network, the channel is the connection from one active device to another, including any patch cords and equipment cords. In the data center, this could be from an access switch to a server and would include any patch cords used for cross-connects or interconnects between the two. In the LAN, the channel could be the connection from a distribution switch in a telecommunications room all the way to the network card in a laptop.

The overall length of the channel, including the cabling and any cords should not exceed 100 meters per industry standard guidelines. There are also recommendations on the length of equipment cords--standards recommend 5 meter patch cords.

As the complete end-to-end link over which active equipment on the network communicates, proper data transmission obviously relies on the performance of the channel. It therefore seems intuitive that channel testing would certainly be the way to go, right? Wrong.

Some contractors may prefer channel testing for the simple fact that it's easier to pass, but that's not exactly a good thing. Per TIA standards, combining standards compliant patch cords with a standards compliant permanent link will always result in a passing channel. This design has enabled the plug-and-play application of Ethernet devices. For channel testing, this also means if very high. Quality patch cords are used, the channel can pass even if the permanent link has failed. Why is this a problem?

Permanent link testing also offers your customers the benefit of being able to retest the permanent link so that the performance at any time in the future can be directly correlated to the performance at the time of installation. Later down the road if there's a problem with the data transmission in a channel, retesting the permanent link can rule out any problems in the fixed portion. Subsequent channel testing can then be done to limit the problem to the patch cords. And this is a problem more often than you think.

While patch cords are an integral part of the network, they often are also considered commodity and quality may be overlooked. They are handled and manipulated more than any other component, which also makes them more subject to damage. Compromising on the quality of patch cords can compromise the performance of the network.

With permanent link testing, a passing link can be reliably configured into a passing channel just by adding quality compliant patch cords.