Millennials who entered the workforce between 2003 and 2016 are accustomed to the digital era: high-speed internet access, smartphones, online everything. And while they’ve definitely experienced advancements in technology during their lifetime, they may not be aware of just how far copper Ethernet cabling has come to make it all possible. We thought we’d start off 2022 with a little Ethernet history lesson for the younger generation and a walk down memory lane for those of us that have been in the industry a bit longer than we’d like to admit. 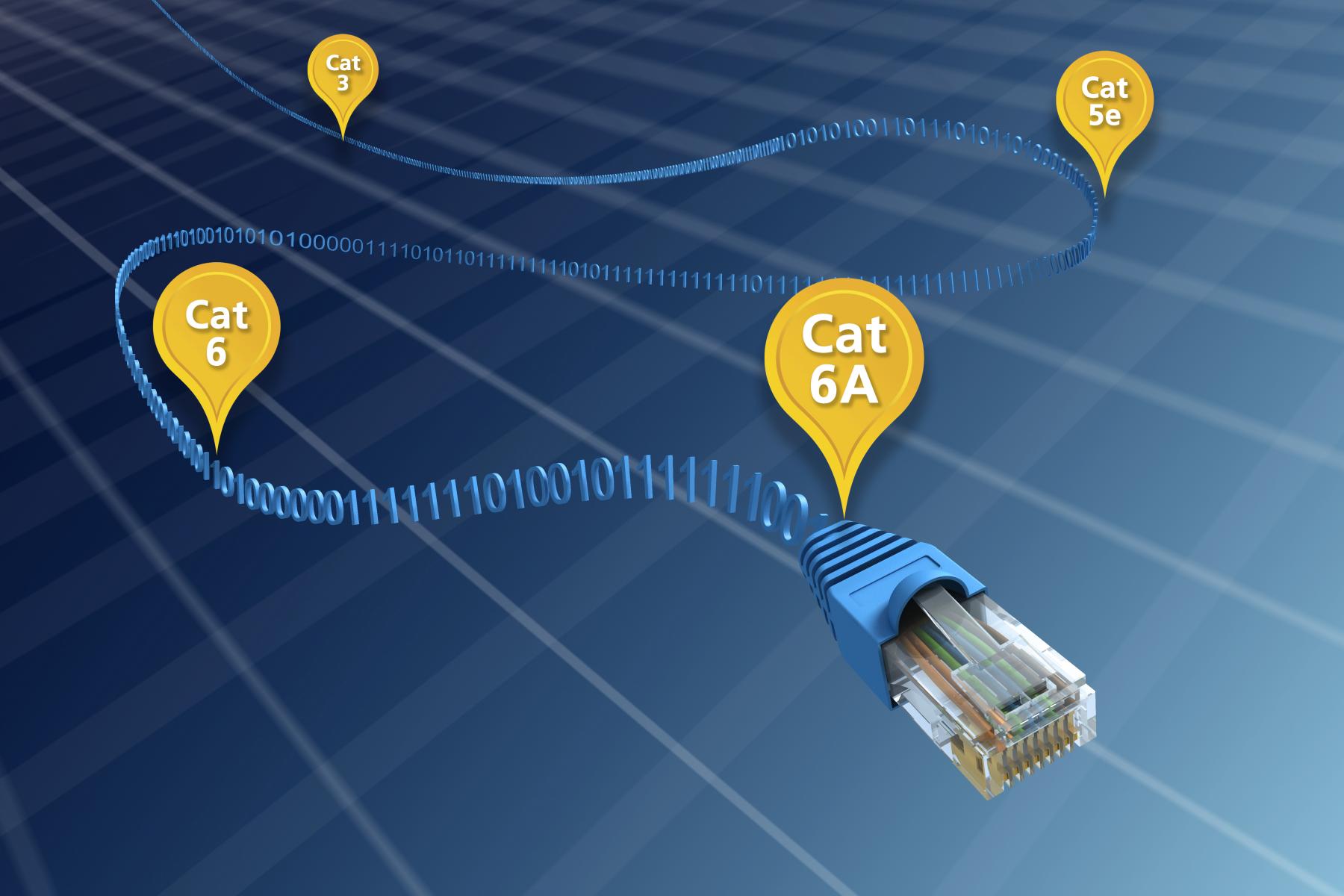 Ethernet was developed in 1973 by Bob Metcalfe at the Xerox Palo Alto Research Center and supported by thick copper coaxial-type cables. The first version, 10BASE5, featured extremely stiff cable nearly a half-inch in diameter, and was later joined by 10BASE2, using cable about half as thick and much more flexible. In the late 1980s, the development of the Ethernet hub, and later the switch, allowed twisted-pair copper cables to become the primary medium for supporting Ethernet.

In 1989, Anixter, a distributor of cabling products, introduced their “Levels” program, the first written performance specification for data cabling systems. This became the basis for the first official standards-based category cable, ratified in 1991 by the Telecommunications Industry Association (TIA) as Category 3. It supported 10 Mb/s (over two of the four pairs in a Category 3 cable) and paved the way for the evolution of twisted-pair category cables over the next 30 years. While no longer recommended by industry standards, Category 3 still has an installed base in some commercial buildings for voice. (In some of these older installations, you’ll find that two pairs are used for data and the other pairs are used for another connection, or a voice pair.) Following Category 3, Category 4 was around for a moment, then quickly replaced by Category 5—both of which are now defunct and no longer recognized within cabling standards.

Around 2001, Category 5e came along with better crosstalk performance to support gigabit speeds. Then came Category 6 with a bit more headroom, allowing it to support 10 Gb/s—but only up to 35 meters. With qualification testing, some installed base of Category 5e and Category 6 cables can support 2.5 and/or 5 Gb/s to 100 meters for Wi-Fi 6 deployments, with the potential to support 10 Gb/s to 55 meters or less.

Category 6A—capable of supporting 10 Gb/s to 100 meters—was ratified in 2009. It remains the recommended medium for all new horizontal LAN deployments. While it’s been around now for more than a decade, Category 6A was perhaps a bit ahead of its time; it only been within the past five years that any common LAN applications have required speeds of 10 Gb/s to the end device, and there are still many that operate at or below 1000 Mb/s.

You might also be curious about Category 7 and Category 7A, ratified by ISO/IEC in 2002 and 2010, respectively. While never officially recognized by the TIA, Category 7A remains a popular cabling media of choice for supporting 10 Gb/s in parts of Europe. Then there’s Category 8, which got a lot of hype as a solution for supporting 25 and 40 Gb/s in 30-meter data center switch-to-server links but hasn’t quite taken off—power consumption has remained an issue for 25/40GBASE-T active equipment. Advancements in transceiver technology also now allow data centers to easily support 25 and 50 Gb/s switch-to-server links using SFP28 or SFP56 direct attach cables in short-reach top-of-rack (ToR) configurations or active optical assemblies and fiber structured cabling in longer links. That doesn’t necessarily mean that Category 8 is dead. It (or some version of it) may eventually support 30-meter horizontal links in the LAN for applications that require higher transmission speeds than Category 6A can support.

Why Do We Still Use Copper Cables?

While the price of optics has come down significantly over the past two decades, reducing the overall cost of fiber systems, copper-based cabling systems are still less expensive when factoring in active equipment. Copper-based installation tools are more affordable and installation techniques are simpler. Therefore, copper-based cabling is still the de facto choice for the majority of horizontal LAN deployments. Power over Ethernet (PoE) technology that has advanced alongside copper cabling has a lot to do with that.

Ratified in 2003, IEEE 802.3af Type 1 PoE delivered a maximum of 15.4 W over two pairs of category copper cabling. That was followed by 802.3at (Type 2) in 2009 to deliver up to 30 W. Then 2018 saw the ratification of four-pair PoE with 802.3bt Type 3 and Type 4 at 60 and 90 W, respectively. Now it seems nearly every connected device is being powered with PoE. The combination of copper category cabling and PoE is what supports the bulk of today’s advanced smart building technologies at the edge of the network, from high-throughput Wi-Fi, AV over IP, and digital signage to distributed antenna systems, video surveillance, and digital lighting.

The Future of Copper Cabling

As emerging IoT technology places even more devices on the network, additional advancements will maintain copper cabling’s position. One technology that the enterprise is gearing up for is single-pair Ethernet. Ideal for low-speed, low-power operational technology (OT) devices in the LAN, such as sensors and controllers used in building automation systems, single-pair Ethernet is slated to support up to 10 Mb/s to 1000 meters over a single-pair twisted cable and deliver from 7 to 52 W of single-pair PoE (SPoE), depending on cable length.

Fluke Networks Has Always Kept Up

The good news is that, as copper cable has advanced over the years, testing has kept up. While Fluke Networks’ DTX CableAnalyzer (introduced in 2004) brought certification of category copper cable to a whole new level, the DSX CableAnalyzer™ Series Copper Cable Certifiers (2013) with the Versiv™ platform offers much faster certification testing, along with faster setup, reduced mistakes, and easier reporting. With ongoing Versiv firmware upgrades, the DSX CableAnalyzer can certify all current categories of copper cabling, as well as qualify Category 5e and 5 for 2.5/5GBASE-T.

Fluke Networks has also kept up with advancements in copper cable technology with solutions like the LinkIQ™ Cable + Network Tester, which can qualify a copper cable plant and conduct live PoE load testing. And we’ve got our eyes on emerging technologies like single-pair Ethernet to ensure testing support when it comes to fruition.

But it’s not just the cable and applications we’ve kept up with. Over the past decade, Fluke Networks has made documentation and reporting easier with LinkWare Live, the cloud-based service that allows for uploading test results from any location—over sixty million uploaded to date. We’ve even added features to LinkWare Live like wireless connectivity, GPS tracking, and calibration and firmware status.

Only time will tell if copper Ethernet cable evolves any further, but you can rest assured that Fluke Networks will keep up with whatever future applications, technologies, and testing capabilities these cables need to support.